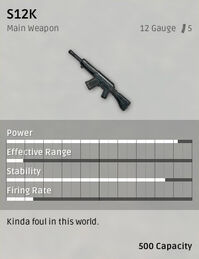 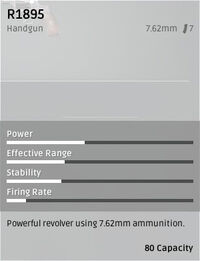 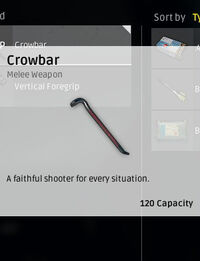 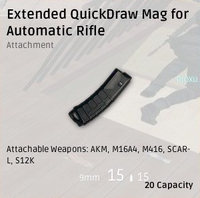 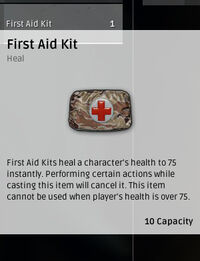 The following is the recommended Best Close Quarters Loadout for PLAYERUNKNOWN'S BATTLEGROUNDS.

As a close combat specialist, you're going to want weapons that focus on close, localized, intense damage. You're also one of the few loadouts where we suggest having a powerful melee weapon to fall back on.

For this loadout's main weapon, we suggest the S12K. The main draw of the S12K is that it's a highly powerful shotgun with a ton of stopping power, which makes it great for close quarters combat, and it has the high fire rate of a semi-auto.

While you lose quite a bit of range going with something like the S12K, that doesn't really matter in houses or small areas, as the range is ultimately negated as a concern the second you get within a handful of feet.

The R1895 makes a perfect sidearm for this build. While it shines in terms of stopping power, making it a great companion for the S12K, the main benefit of the R1895 is the fact that it has a pretty good effective range and stability rating.

This extended range and stability should allow you to deal some initial damage from midrange before you draw the S12K, tipping the scales in your favor. In a game like BATTLEGROUNDS, even a small advantage like that is very, very valuable.

A good secondary approach is to forget the firearm angle, and go for a melee weapon. The Crowbar would be our pick here, as it offers decent damage for limited capacity. That being said, you should definitely go for the firearm rather than the melee weapon, as depending on melee means you have to get so close that you're essentially evening the odds in a fire situation.

The Extended QuickDraw Mag for Automatic Rifle is a magnificent attachment for the S12K, increasing magazine capacity from 5 up to 8, allowing the user to suppress enemies without fears of running short on shells mid-fight.

As always, we heartily recommend Med Kit consumables. This is even more important given your close range nature, so stock up and use often if needed, as nothing else spells "you're going to die" in brighter letters than low health in close range combat.