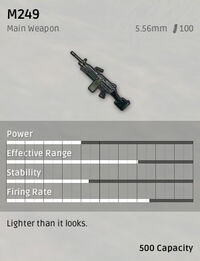 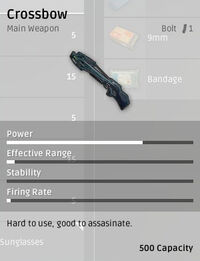 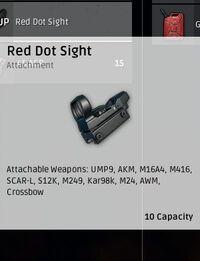 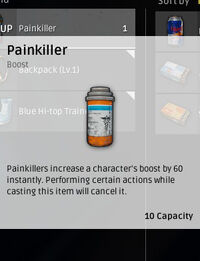 The following is the recommended Best Defense Loadout for PLAYERUNKNOWN'S BATTLEGROUNDS.

Surviving in BATTLEGROUNDS is a matter of two things: luck and preparation. While where you jump out and how quickly you can find a weapon certainly determines the beginning of the game, what gear you choose to fill your limited inventory space with will determine the end game. To that end, we've put together a few small guides to help you survive past those initial few minutes, and maybe even dominate in the small winner's circle of the last few minutes.

For this build, you're looking for weapons that offer great defensive capability. This means you're going to want weapons that allow you to keep enemies at bay while also switching to close range when required. Additionally, there's a few small pieces here that are great for stopping enemies from ever getting close enough to you to do damage - something that will keep you alive much longer than your cohorts.

The M249 is a great main weapon for the defense class. While it's not really a damage dealer per se, its effective range and really awesome fire rate means that you can keep enemies at range while you retreat to a better location.

This might be a controversial choice, but the Crossbow is actually a really good sidearm choice. Because it deals a lot of damage in a single shot but takes forever to rearm, it's a good last ditch weapon in close combat where accuracy isn't that important.

When cornered, switching to the crossbow, and firing off a single shot to center mass or the head is enough to neutralize a threat quietly. Alternately, this is a great weapon to take out an enemy at range.

As far as attachments are concerned, your best bet is the Red Dot Sight. This sight is sort of a middle ground sight, not really granting any telescoping but still giving you a lot more accuracy than basic iron sights. They'll help you keep a focus on your target while moving without being "locked in the tunnel vision" of the telescoping sights.

Because you're going to be "running and gunning" so much, the Painkillers are a great choice. They'll give you boost instantly, letting you deal damage while also retreating to a safer spot.