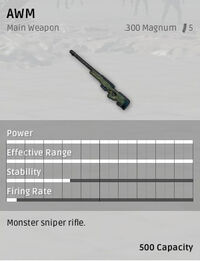 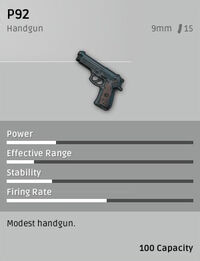 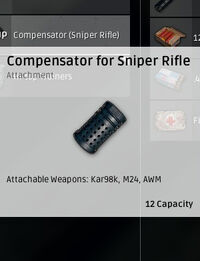 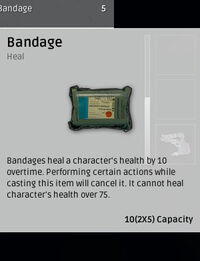 The following is the recommended Best Ranged Loadout for PLAYERUNKNOWN'S BATTLEGROUNDS.

The ranged loadout does exactly what it says on the tin - keep your enemies at range, preferably killing them before they ever even see you. Because of this, you're looking for weapons that offer crazy range and damage, and attachments that help towards that end.

The AWM is by far the best weapon of this type. With amazing stopping power and effective range, this rifle does a huge amount of damage to anything it hits. For this loadout, this is best paired with a stability attachment, as it will let you "post up" either on roads or near towns, picking off enemies as they move about.

For your sidearm, the P92 is a great choice. Sniping often means that people are going to try and sneak up on you. Having a medium power pistol with a relatively shorter effective range (but with the requisite tradeoff of higher rate of fire) means that if you are cornered, you can whip around and unload a mag into the enemy.

The Compensator for Sniper Rifle is perfect for our needs here, as it results in decreased recoil and slightly better recovery from firing. This means that you can keep a more effective bead on your enemy and maintain that aim shot after shot.

As far as scopes are concerned, the higher the magnification level (x8 vs x4, for instance), the better.

While it seems counterintuitive to suggest the Bandage over the First Aid Kit, the Bandage is a better choice here, as it leaves more space for ammunition. These are especially effective since you're going to have massive range on your enemy, and so the only damage you're likely to need this for is small arms localized fire.