How to Play Guide for PLAYERUNKNOWN's BATTLEGROUNDS 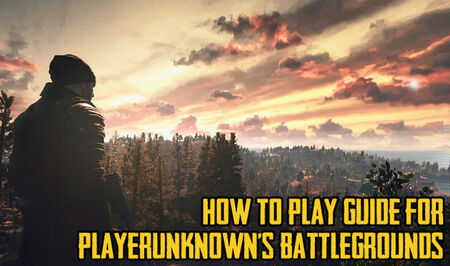 This guide will help you learn how to use weapons, kill players, and win at PLAYERUNKNOWN's BATTLEGROUNDS!.

Check out our suggested best loadouts for optimal gear choices!

How to kill enemies

BATTLEGROUNDS puts you right in the fray, and because of this, it might be hard to take down players. There's three basic techniques you can use though, dependent entirely on your style, that can make you an absolute juggernaut.

First and foremost is the ranged fire technique. This uses weapons with scopes to pick off distant enemies. Wait until your enemies are moving away from you in a clear line to open fire, as this will remove most areas for them to hide, giving you the most chance to deal major damage. Right click once for scope view, hold right mouse click for general zoom view.

A big part of this strategy is the idea of the vantage point. Vantage points are areas on the map that are higher ground than the rest or otherwise give you more and better opportunities for aiming and firing. Second floors of buildings, tall hills, and wooded areas are all examples of great vantage points, as they give you a clear sight of the land and the ability to pick off enemies at range.

Close and Loud is the principle of engagement where you fire on an enemy in quick, sudden bursts after disabling them in some other fashion. This can include using gas grenades or flash bangs and then turning around corners to lay down heavy fire and other such techniques. The big goal here is to disorient your enemies, making them confused and thus ineffective.

High-capacity weapons are important here, as you're going to need every shell and cartridge to carry out these sorts of attacks. Keep in mind that a very important part of your loadout is the sidearm, as it will allow you to put down resistance even when you've run out of primary ammunition.

Perhaps the best combat strategy is one not even of combat - just wait. Because you're in a pool of many players, you can essentially wait out the clock, letting players kill each other before swooping in with one of the other techniques and clearing the area that way. This is a good technique, but keep in mind that as the game progresses, the battle area shrinks, giving you fewer options for vantage points and assaults.

A big part of BATTLEGROUNDS is playing the map. Understanding the general concept of where people are likely to go, how to move silently, and so forth are key to your long-term survival.

In BATTLEGROUNDS, everyone wants to kill you - literally. With enemies on every side, all bearing down on you, the ability to move throughout the map without attracting unwanted attention is incredibly valuable. Here are some tips to keep in mind that'll help you to this end:

There are a few areas of the map that are high traffic, and should largely be avoided. These areas can cause you to be ambushed by multiple players each looking for resources as well, so you need to wait and see whether or not the threat is worth the possible reward. These areas include most towns, buildings, bridges and the military base. While items will spawn here more often, they attract players and thus raise the danger to new levels.

This is a good and bad thing, though. While the danger is indeed heightened, it also means you have a good spot to set up ambushes and create choke points. Choke points are when movement is narrowed in a small area, forcing players to move through a guided path. An instance of this would be in towns where buildings create a natural main street or avenue - if planned correctly, these natural choke points can funnel players into a good spot for tossing grenades or opening fire, drastically reducing the player count quickly.

Weapons in BATTLEGROUNDS fall into one of three categories - RANGED, ASSAULT, and SUPPORT. Ranged weapons are those with scopes and other attachments that facilitate engaging an enemy from far away, and are best used outside of urban environments where line of sight is preserved. ASSAULT weapons are those with medium ammunition counts and high mobility, but less accuracy. These are great for basic assaults and ambushes. Finally, SUPPORT weapons are those with high bullet throughput OR high damage throughput, ranging from heavy machine guns to shotguns. These are best for clearing wide areas and controlling your enemies' movements.

For more specific information, check out the following pages: