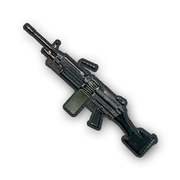 Light Machine Guns (LMG) are a type of weapon in BATTLEGROUNDS.

Light Machine Guns are essentially weapons that boast higher rate of fire over Assault Rifles and a slight increase in bullet damage, but with a much higher drop off in terms of range and ammo carrying capacity. While LMGs themselves can fire more bullets, they go through these bullets much faster, and because of how many of them there are, you go through them a lot faster too. This limits their usefulness dramatically.

LMGs in general are not considered useful enough based on our data, so we are slightly increasing their damage potential to improve the weapon's role. For MG3 we saw very little usage in our data compared to the other crate weapons so we are making it more powerful.

Note: Since Bluehole doesn't release the official weapon values of guns, no website has 100% accurate statistics for weapons. Each website relies on hundreds of spreadsheets and each website has different numbers. Most websites recorded their data via private matches and some don't include the feet/range. No one knows if the tests were consistent when recording the data. In short, no one has the exact numbers, but this data is close to the real values.