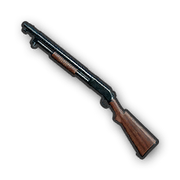 Shotguns (SG) are a type of weapon in BATTLEGROUNDS.

Shotguns are weapons designed to fire shell cartridges that are different from normal bullet cartridges. Shells are usually loaded with a kind of pellets that can vary in size depending on the desired application. The shell is loaded with a wad that acts as a wall, pushing the pellets or payload out of the shell cartridge. This means that most rifles used for shooting shotgun shells uses normal barrels without rifling which makes them less effective for shooting bullets designed for rifled barrels.

In real-life there are different types of shot that are loaded into a shell depending on application. The most common are: small pellets for clay pigeons and pest removal, buck shot for larger targets and law enforcement applications, slug for rifled barrels that acts as one projectile, bean bags for less than lethal applications and flechette nails that penetrate tissue.

Because of the spread of the pellets, the shotgun is less useful over larger distances, as the traveling projectiles tend to travel away from the center of the predicted bullet path eventually covering the area much like a cone shape. With an adjustment of the barrel using a choke, the rifle can direct most of the pellets in a more narrow path, making the shotgun more effective even at medium ranges.

The Shotguns in Battlegrounds continue to have a very limited role as seen in our data, to improve their usability we are increasing the effective range. Increased damage drop-off range to improve effective range by several meters per shotgun

Note: Since PUBG Corp doesn't release the official weapon values of guns, no website has 100% accurate statistics for weapons. Each website relies on hundreds of spreadsheets and each website has different numbers. Most websites recorded their data via private matches and some don't include the feet/range. No one knows if the tests were consistent when recording the data. In short, no one has the exact numbers, but this data is close to the real values.